On August 25, dozens of young people gathered at the Landmark Youth Travel Agency in Lhasa were extremely excited. These young men and women who came to Lhasa from all over the country, half came by bicycle and half by hitchhiking along National Highway 318. The so-called hitchhiking is to walk while hitchhiking. I am a hitchhiker. From Aba, Sichuan, along National Highway 318, I went through 11 days of hardship. Arrive in Lhasa. After 12 o'clock, the students still had no intention of sleeping. Anyway, they would go out at 4 o'clock, so they took out their snacks and scrambled to tell their stories on the journey. At 4 o'clock, we went out. The night sky in Lhasa was still shining with stars. It seemed that we could take it off with our hands. Ten of us took two taxis from Lhasa City to Zhepeng Temple. Who knows, traffic was controlled five kilometers away from Zhepeng Temple. All the people who went to worship Buddha were driven into the corridor made of steel tubes. Two hours later, we had already "Anza" here. Tens of thousands of followers, tourists sit quietly under the exhibition platform on the mountainside of Genpei Uzi, waiting for the annual exhibition of the giant Sakyamuni Tangka. Zhepeng Monastery is a disciple of Zongkaba, founder of Gelug Sect of Tibetan Buddhism, Jiang Yang Quji. Zhaxi Bandan was founded in 1416 A.D. Zhepeng" Tibetan means "Midui". The temple is a huge white complex built on the hills. It looks like a huge Midui in the distance, hence the name Zhepeng Temple. The annual Lhasa Shelton Festival officially opens after the Buddha exhibition ceremony in the temple. For hundreds of years, Buddha exhibition is one of the most important activities for Lhasa traditional festival, according to the precepts of the Gelug Sect of Tibetan Buddhism, the spring and summer when the recovery of all things, in order to avoid accidentally killing, during the Shoton Festival before, the people in their homes closed door practice to the Tibetan temple, after 30 June can be lifted out of the temple. On this day, the local believers put their own yogurt a monk, has today Sholton "", "" "snow for yogurt, meal for dinner """. "Om Mani Padm", we in the dim light, with the hands of the Tibetans, twist beads kept chanting that mantra. Everybody looked at the east side of the hill, the dawning of the day, after a while, Gu Xiula (monks honorific) will put the Buddha from the Coqen hall at knutsford. At the moment, sang Yan began to diffuse over the drepung. 7:30, morning light believers calm and quiet, the sound came from fahao temple hall, believers and tourists took off his hat, his hands clasped together chanting prayers. Hundreds of monks and believers together shoulder out of a huge Thangka paintings, in the ceremonial team and the Lama Temple monks lead, slowly toward the root peiwuzi mountain, the giant Thangka placed in stone towering, Knutsford auspicious clouds shrouded. Drepung Satin Shakya Muni Giant Buddha Thangka, high 80 meters, 41 meters wide, only a year on the first day of the Tibetan Shoton June 30, to show the true color of believers. 8 pm, accompanied by Buddha Yan started slowly, the Tibetan people out in the bosom of the white hada throw to the Buddha, and he bowed to pray, pray for all sentient beings 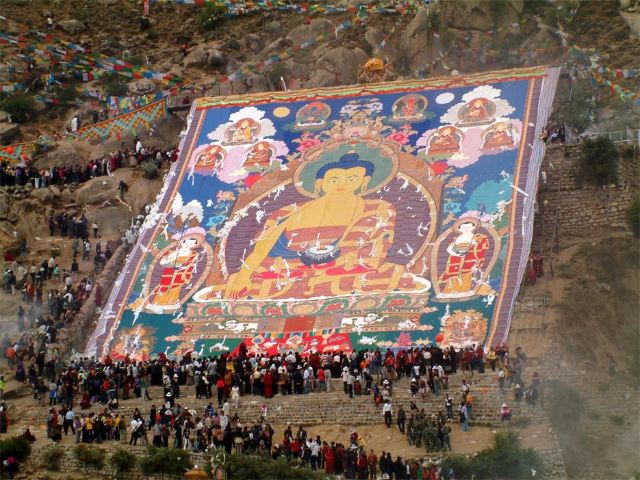 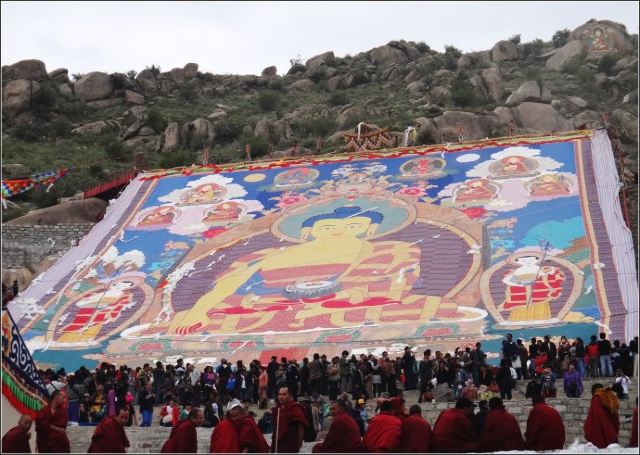 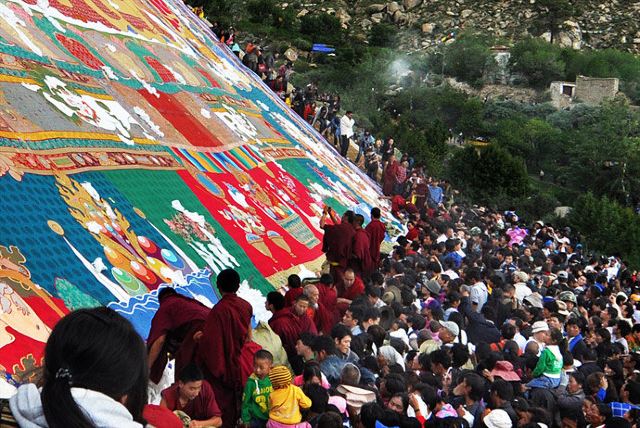 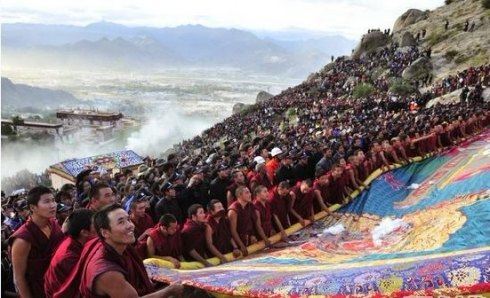