The periphery of the temple was badly damaged. The first corridor wall had abundant reliefs reflecting the living conditions at that time, but it had no roof and became an open-air gallery. Because time is too short to take a close look, I went straight to the central palace to see the famous "Khmer's smile" - the four-sided pagoda shaped by the peaceful and smiling Guanyin Bodhisattva, which was also carved according to the face of King Vajbama VII. Although I've seen "Khmer's smile" from online books before, standing in front of the real thing is still very shocking. The temple was built at the end of the 12th century. After thousands of years of sunshine and rain, the smiles solidified on the stones were incomplete and beautiful, and the vicissitudes of life were calm, so that the impetuous heart immediately calmed down. It seems that the lingering charm of Angkor civilization still echoes in the jungle, recording the time and amazing the world. Because it's cloudy, the pictures have a normal effect. It is said that there are fewer visitors before morning or evening, and the photographic effect is better. 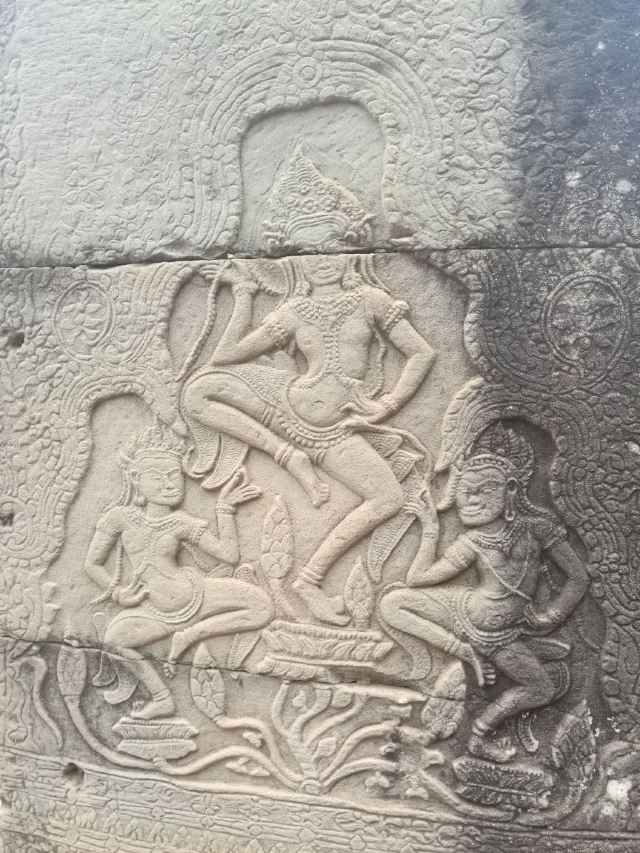 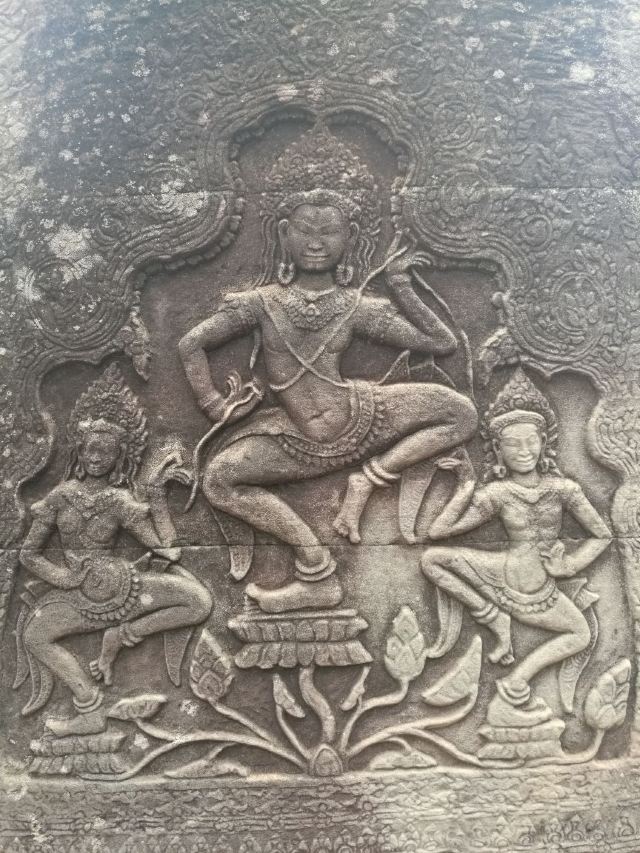 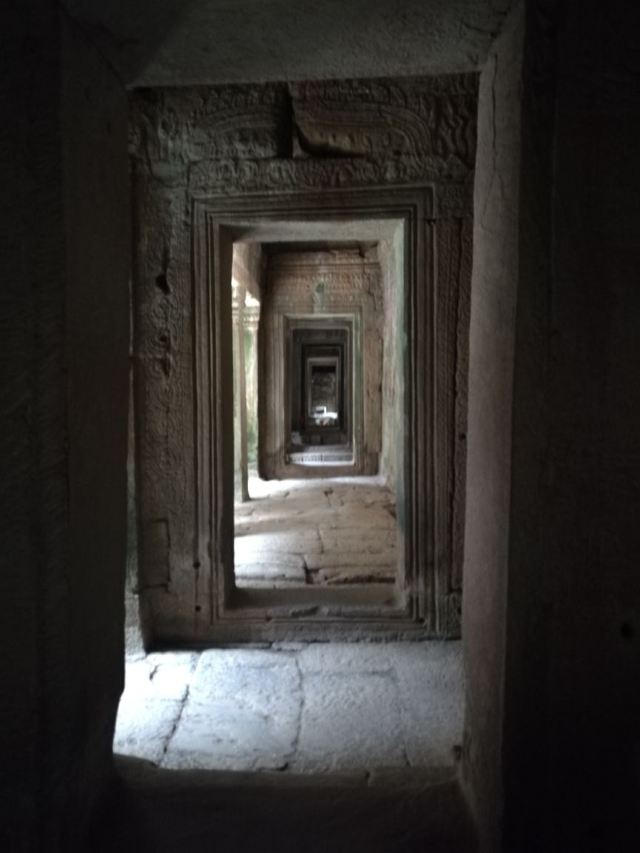 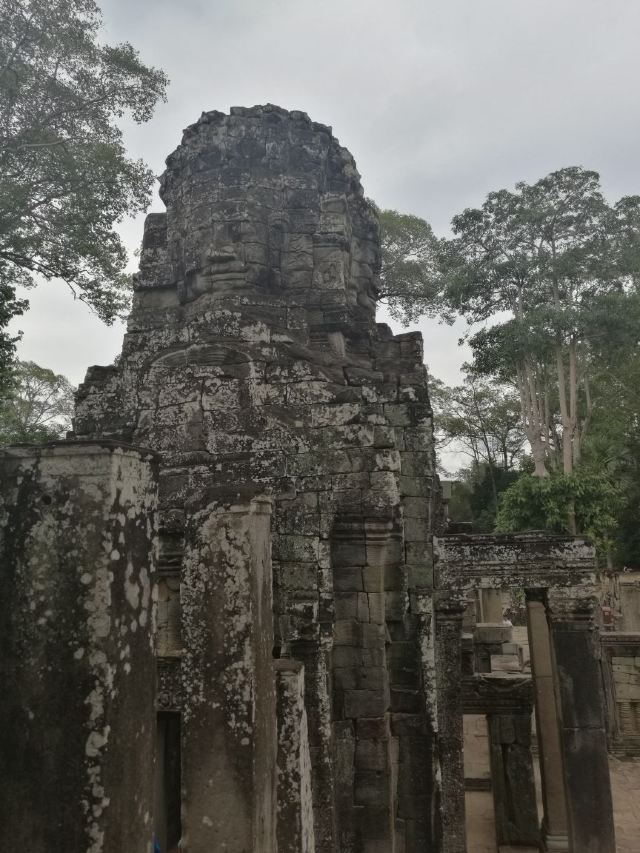 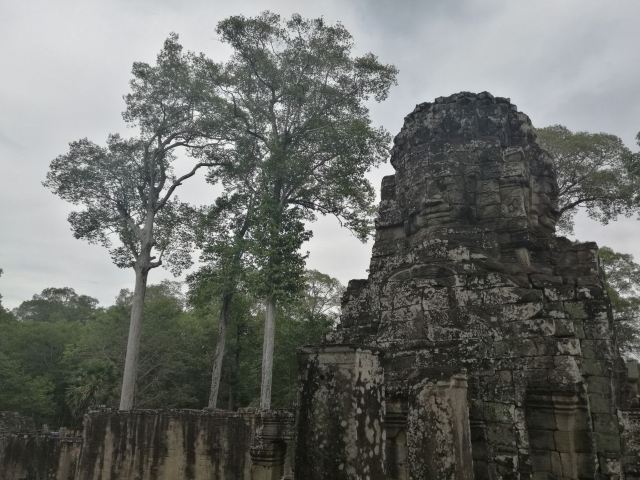 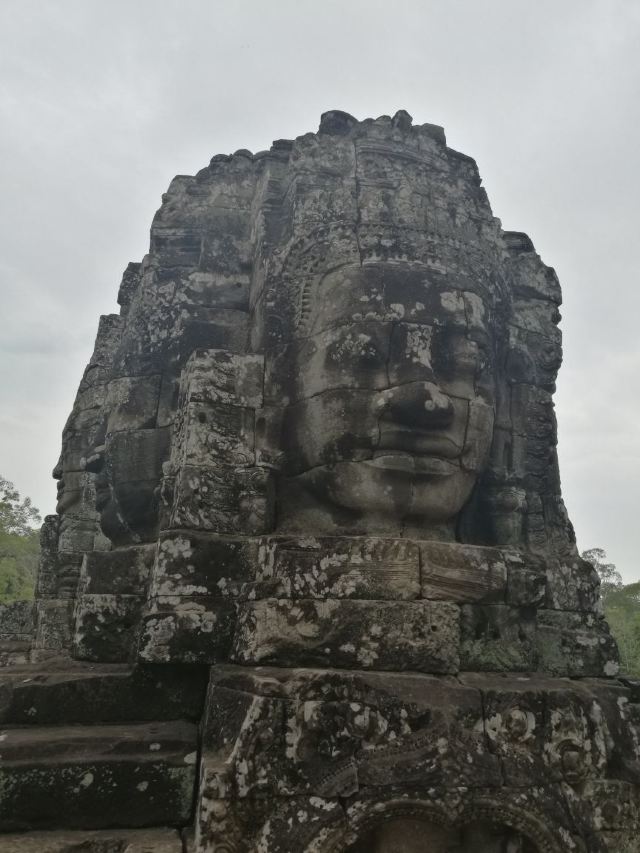 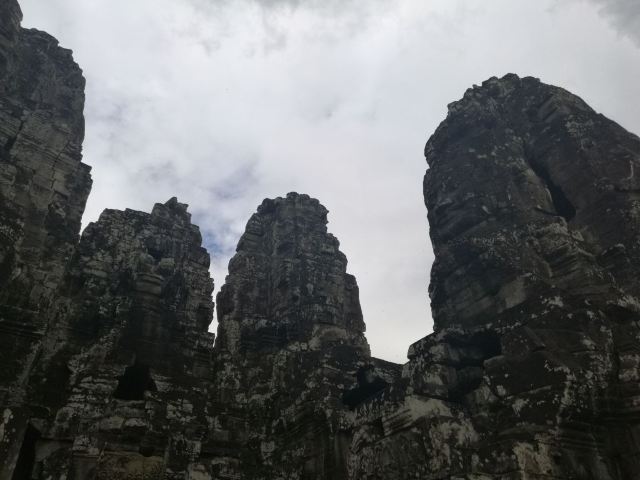 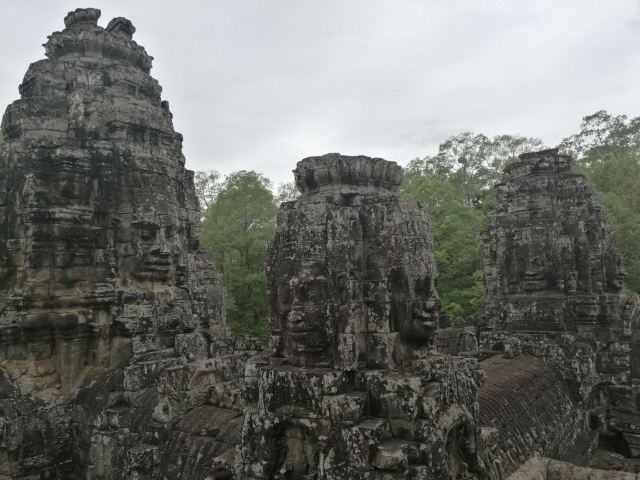 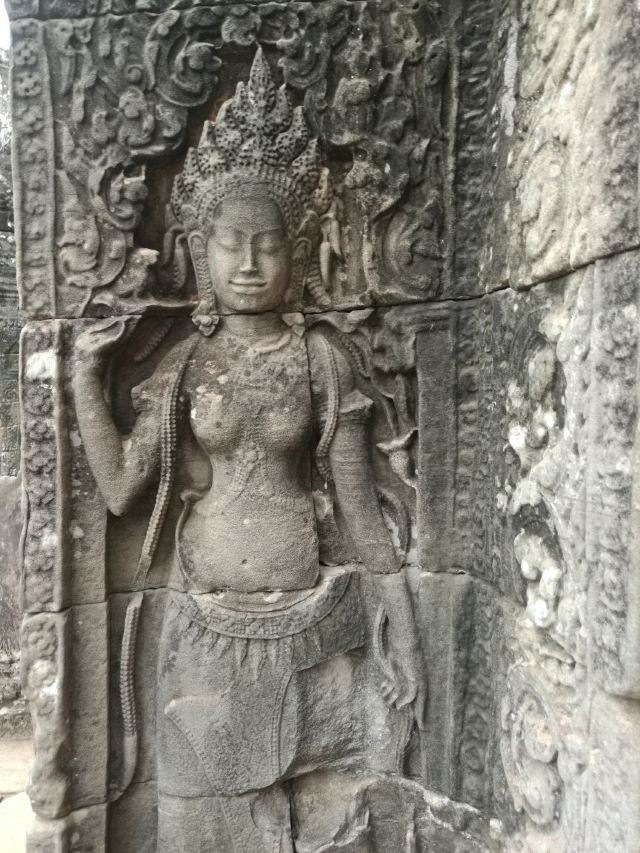 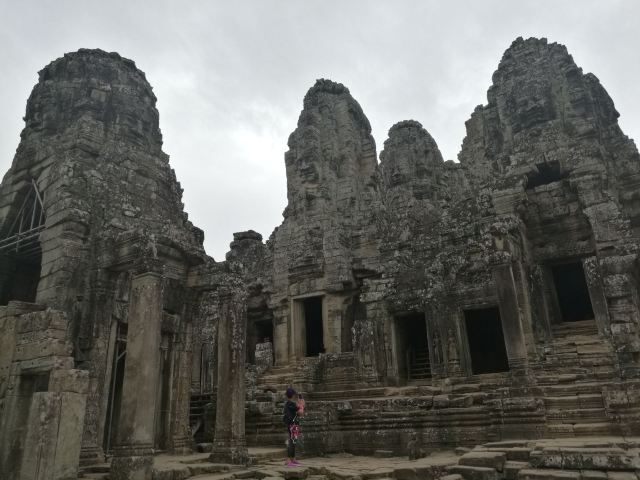 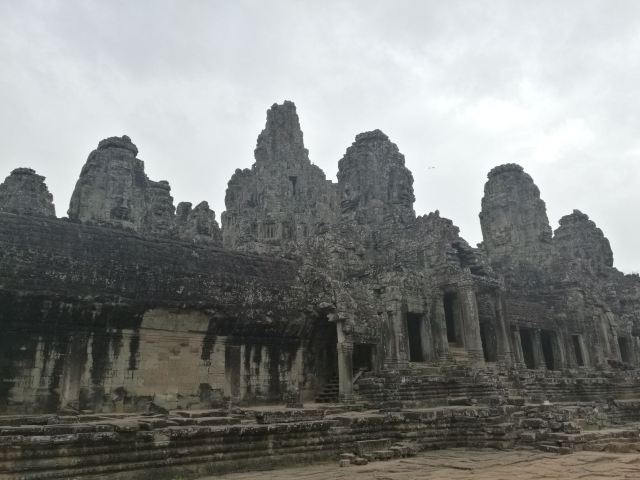 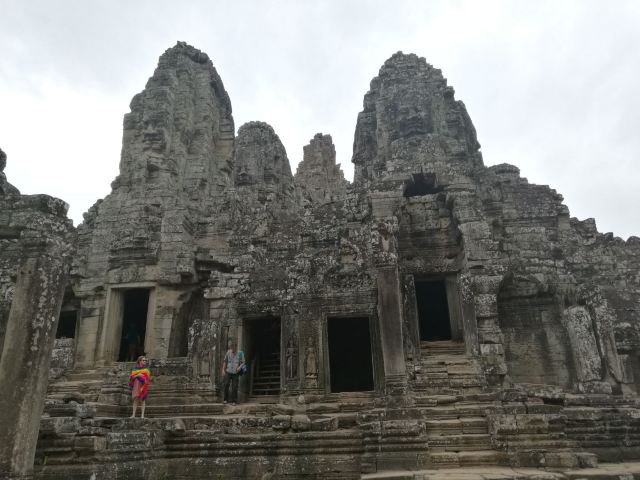 带着Cici看世界
带着Cici看世界
5/5
작성일: 2018년 5월 4일
3
5/5
If time is tight, every temple in Angkor Wat is not necessarily to go, but the Barong temple is to go. TIPS - "1, because the Barong temple is east-facing, so the best time to take a positive picture of the Bayang temple is in the morning; 2, it is suggested to go early and take good pictures, we arrived at more than 8 o'clock, there are already many tour groups. 3. If time permits, you should go to the Barong Temple again at dusk, when there are quite a few people. Under the golden light of the sunset, the soft light is also suitable for taking pictures. To Barong Temple, the most important thing must be to see the four-sided Buddha, and Cambodia is known as "Khmer's smile" mainly because of the four-sided Buddha. There are 49 pagodas in Barong Temple, all of which are giant statues of four-sided Buddhas. The statues are typical of the faces of Khmer people. It is said that they are the faces of King Rongye Bamao VII, the God who built Barong Temple. Forty-nine pagodas, together with five pagoda-like gates, represented 54 provinces under the control of the then prosperous Angkor dynasty. Looking from afar, it is already very spectacular. The Buddha has a peaceful smile on his face. This is the "Khmer smile" that makes Angkor Wat famous in the world. Some people say that this is the seventh King of Voyaba, who left his own smile on 49 stones, each with four smiles, nearly 200 faces. If Mona Lisa is the most beautiful woman's smile, then the smile of Royal Yabama VII in Barong Temple should be the most beautiful male's smile. Hundreds of years after Hinduism ruled Angkor, the greatest monarch in Angkor's history, Poyama VII, suddenly converted to Buddhism and carved smiling Buddhas everywhere in Bayan Temple, as if foreseeing the future of this land, his people will suffer a variety of hardships and comfort the people with a smile.
kevin1027
kevin1027
5/5
작성일: 2018년 1월 23일
6
5/5
Siem Reap, Cambodia. Barong Monastery is the first stop on the Great Angkor Line and the most famous monastery in Angkor. It is famous for its Khmer smile, so there are many tourists. According to the local people, the most Chinese people come to Cambodia, followed by Koreans and Japanese people, ranking third. Sure enough, we saw these ethnic groups in the Barong Temple, with a similar proportion. Barong Temple is a group of smiling people. The four Buddhas on the top of the temple are all smiling. Each smile will be slightly different. There are two standard smiles designated by local people. Everyone will take pictures there. Into the four-sided Buddha, the huge corridor up and down, like a maze, like the scene in the game cs, no matter how to go, there is no dead end. Many people, once dispersed in it, become quiet. Unfortunately, Angkor, the world's top ten wonders and world cultural heritage, is open to temple protection. Although there are hints not to trample or touch, the stone or statue for thousands of years is still open and accessible.
286***10
286***10
5/5
작성일: 2017년 5월 7일
6
5/5
As the center of Great Angkor, Barong Monastery is also a legend. When entering Great Angkor, we need to change cars. The gate of the wall is to limit the height and width. As the most beautiful moment of the king, Barong Monastery is the representative of the Buddha statue that the king makes a smile. It is handed down from Dynasty to Dynasty and is as carefree as the Buddha. The palace has been excavated completely because of financial problems, many walls have not been repaired completely. The traces of history are vivid, sunshine, rain, stone has been weathered, rubbing with hands will fall off, so we should pay attention to the protection of cultural relics and protect their own safety when visiting scenic spots. There are all kinds of vendors around the city, 2,000 Rier ice sticks, which taste very good, absolutely no additives.
M48***69
M48***69
5/5
작성일: 2018년 2월 19일
5
5/5
Cambodia-Cambodia & has been thinking about the four-sided Buddha mind, the day before yesterday when visiting crowded, come and go in a hurry, always feel some regret. This morning, I communicated with Lee and decided to go to Barong Temple before visiting the Grand Circle. Up the steps, turn around, look back, look up, look around, and a Buddha statue with four eyes opposite, that smile warm and mysterious, let me forget, just feel Huazhi Chunman. Angkor wat ruins are numerous, and several small temples have been visited, which are small in scale, small in number, meticulous in consideration, and have different architectural sculpture styles. visited many temples in three days, the deepest impression is the ancient trees and rubble, they intertwine with each other, just like human and nature intertwined in the long years. To this day, this entanglement seems even more and will continue. & evening hotel roof, watching the red sun falling bit by bit, at this moment just want to be a spectator in the sunset, waiting for such a short period of time.
더 보기